For some wild greens, such as some types of thistle, amaranth, broccolini, stinging nettle, mallow, purslane and fennel, harvesting consists of cutting the young shoots by hand. Other greens are harvested by cutting the whole plant with a knife from the root just below the base. Remove old and sick looking leaves and wash the greens by dipping them in plenty for water, changing the water until no dirt is left in the water. Wild greens produce nutrients during the day and store them in the roots at night. Therefore it is suggested to harvest the young shoots in the afternoon and the root part in the morning. In practice, it is doubtful whether this was observed. Wild greens are rich in vitamins, fibres, antioxidants, proteins and considerable quantities of flavonoids.

The most common way of cooking wild greens is by cooking them in boiling water – in order to maintain their bright colour. They are cooked until soft and are served as a salad – warm or cold. Some greens, such as amaranth, take only a few minutes to cook while others such as dandelion take longer. The salt is added towards the end. The dressing usually consists of lemon and olive oil; diced onion and / or garlic is optional. They accompany other dishes or are eaten with bread, olives or cheese for a light meal. The leftover juice is dressed with lemon juice and drunk as a tonic. It is nutritious, has a cooling effect and it is diuretic.

Cooking with olive oil is another way of eating wild greens. Fry onion and garlic (and hot chilli if you like) until they start browning, add diced tomato, cook for a few minutes and then add the greens. Cook on low heat until the greens are cooked and the oil blends with the water and the juices. Salt to taste.

This is a very common way of eating wild greens. Normally a number of greens are mixed together and this often enhances their flavour. Some greens such as thistle, chicory and stinging nettle are fillers while others such as Mediterranean Hartwort, fennel, parsley and mint are used in smaller quantities acting as aromatic and flavour enhancers. After washing the wild greens chop them in small pieces, place them in a large bowl, add a diced onion, salt and plenty of olive oil, mix well and squash them well by hand – for quicker and better cooking. The addition of burghul or rice will absorb the excess juices. With some recipes wheat flour and / or course corn flour is mixed with the greens instead of rice and burghul. Oil the baking dish generously with olive oil, cover the base with batter (water, flour, olive oil and salt), add the vegetables and top them with a thin layer of batter and sprinkle some olive oil on the batter. Bake in a preheated oven at 1800C. The cooking will take about an hour.

For an omelette use only tender easy to cook greens such as amaranth and stinging nettle. Place olive oil in the pan, add the washed greens – without drying them as the presence of some water will generate steam for better cooking. Cover with a lid and cook until the greens get soft. By this time the excess water will evaporate. For better flavour add some of the flavouring greens such as mint, parsley, fennel, hartwort and rape and radish leaves. When the vegetables are cooked, break the eggs in the pan and mix them in after a couple of minutes.

Most of the wild greens are normally available in winter. They start growing soon after a good autumn rainfall and under favourable conditions they are available until early summer. In summer people enjoy the many fresh summer vegetables, cooked or uncooked. Typical summer greens that are treated the same way as wild greens (except for pies) include amaranth, fat hen, silver beet and black nightshade (but only the young shoots which are always cooked to kill the poison which is reportedly in them). Wild greens and olive oil are good companions. A very generous quantity of olive oil (preferably virgin) is essential for the development of their superb flavours, especially in the pies. The Cretan people, whose diet is regarded as the prototype of the healthy Mediterranean diet, use a lot of wild greens in their diet – in the number of vegetables used and in quantity. Chop vegetables using a sharp knife by hand – if you feel comfortable – in a bowl or cooking pot. The use of a chopping board risks the loss of nutrients into the chopping board. 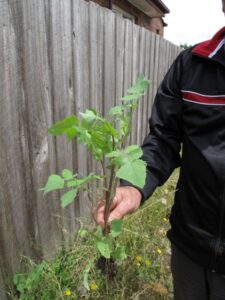 There are many different types available. Some are available in autumn and winter while others in spring. Harvest the young shoots and cook them for a salad, pie or casserole.

The traditional Mediterranean diet (i.e. the diet of this region before the 1960’s) is promoted as healthy and protective against disease. The Greek diet is regarded as the prototype Mediterranean diet. Traditionally, due to their dietary and lifestyle practices, the Greeks have very good health and life expectancy – without an expensive health care system. In Greece, the people of the island of Crete have a better health record and perhaps not surprisingly, the highest consumption of olive oil (25 litres per capita) in the world.

The Greek traditional diet is based largely on fresh, unprocessed seasonal plant foods. It is low in saturated fat and high in dietary fibre, starch, antioxidant vitamins (from cereals, fruit and vegetables) and polyphenols (from wine and olive oil).

Manure in soil and trenches