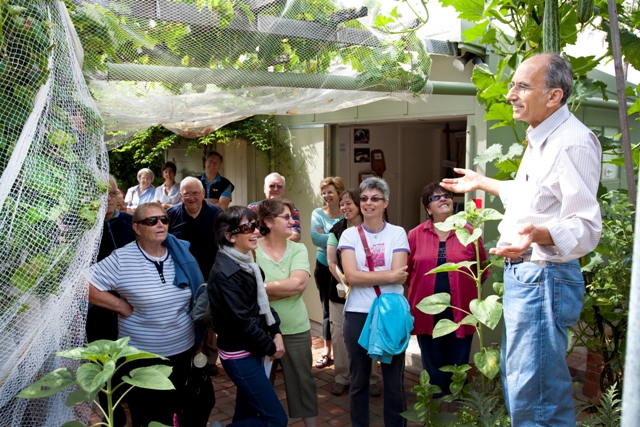 Mark grew up in rural Cyprus, studied Civil Engineering in Athens, Greece, and in The Netherlands and worked as an engineer in Cyprus.

He migrated to Australia in 1974, studied Teacher Training and taught in Secondary schools in Melbourne and has enjoyed extensive traveling in Victoria, Australia and Europe.

Mark retired early to follow his interests in the natural flavours of the everyday food of his childhood i.e. the traditional everyday Greek / Mediterranean diet. It has become a semi-retirement teaching profession with the CAE (Centre for Adult Education, Melbourne) for more than 20 years.

As a guest speaker, Mark has appeared at many forums ranging from neighbourhood groups to conferences and academic institutions.

He enjoys a network of older people, especially Greeks and Italians – the master creators and practitioners of the traditional everyday Greek / Mediterranean diet. 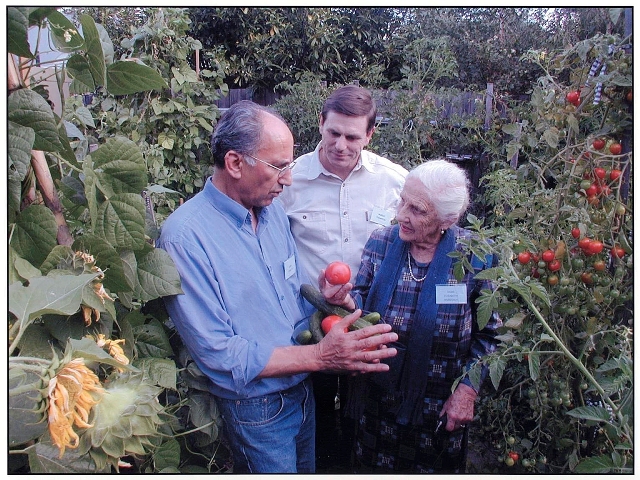 Mark Dymiotis in his garden with Murray Thompson MP and the late Dame Elizabeth Murdoch, 2004

In 2004 he worked with Murray Thompson, State Member for Sandringham, Victoria, in the organising and running of a very successful backyard vegetable growing competition in Melbourne. The event attracted considerable media attention, enriched his gardening knowledge and increased his enthusiasm for the promotion of such gardens for increased food flavour, health and environmental benefits.

Dame Elisabeth Murdoch was the patron and launched this competition from Mark’s garden where she shared with Mr Thompson and reporters a traditional meal from the garden.

The garden has been featured on ABC TV, Channel 9 and Life Style Channel. In addition, Mark has appeared on radio stations e.g. ABC 774 and 3AW.

Journalists and cooking experts including author/restaurateur Stephanie Alexander have visited his village-style garden and have written about his work in books and media outlets.

His backyard has been developed in a Greek traditional style where vegetables and fruit trees, as well as the Greek customary but environmentally friendly grape vine pergolas, are the dominant features. An open compost area and a compost bin for the kitchen waste are centrally located for easy operation. Other features of the garden include a large backyard wood-fired oven for bread and pizzas, a small one for roasts and three large water tanks to collect rain water for the garden. The tanks are connected for more efficient collection, storage and use of water. Watering is done by gravity using large hoses with a rug attached at the end of the hose to break the water pressure. 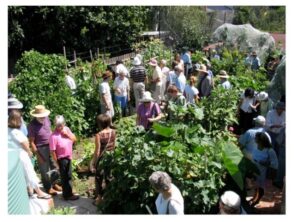 Wild greens, a major part of the Greek traditional diet, such as dandelion, chicory, thistle, amaranth and stinging nettles grow in his garden and are used extensively.

The front garden has been developed in Mediterranean cottage style featuring fruit trees and a culinary and medicinal herb collection planted and maintained by the Herb Society of Victoria.

Essential position: The traditional everyday dietary practices of Greece and the Mediterranean are essential for health, environment and social benefits – especially to low income people.

DYMIOTIS, MARK. “Traditionally, the Greeks have a word for it, fasolada “. THE AGE, Melbourne, 1 September, 1987.

DYMIOTIS, MARK. “Love at the Greek salad bowl can be easy in Australia”. THE AGE, Melbourne. 5 January, 1988.

DYMIOTIS, MARK. A submission to the Cyprus Parliament on Regional Development. Published by the leading newspapers of Cyprus, May, 1989.